Kids love them, pediatricians hate them, and parents buy them in hopes that their children will go outside and get some exercise. The American Academy of Pediatrics recently issued an official policy statement in which the AAP concluded that “the home use of trampolines is strongly discouraged.” Trampoline injuries have been increasing in recent years: between 2008 and 2017, there was a 3.85% increase in pediatric fractures per year. This is the equivalent of an increase from 35.3 per 100,000 people to 53.0 per 100,000. Most injuries occur in the legs, but the most severe injuries result from head and neck trauma. 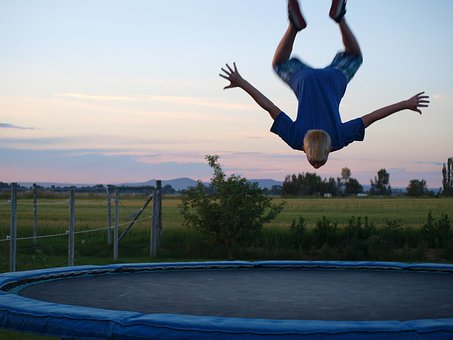 Flight risk (pt. 1): What’s hurting trampoline users and how can they protect themselves?

The six primary causes of trampoline injury are the following:

Furthermore, studies on the effectiveness of additional padding or net enclosures to prevent personal injury have not shown demonstrable increases in safety. Finally, “trampoline parks” or commercial trampoline venues appear to present the same types of safety concerns as home trampolines. A CNN news story reported that one trampoline park in Bellevue, Washington, has had 18 families bring personal injury lawsuits for trampoline related injuries.

While the AAP would prefer that families avoid trampolines, the Academy made the following recommendations for those families that desire to continue to use home trampolines:

In addition to safety issues, trampolines pose a liability threat to homeowners, especially if the injured person is an invited guest or is a child that may have been enticed onto the trampoline as an attractive nuisance. Victims of trampoline accidents and injuries may be entitled to recover damages against the property owner and/or manufacturer of the trampoline. These claims could involve millions of dollars where devastating injuries such as paralysis or traumatic brain injury occurred.

If you are thinking about purchasing a trampoline, stop and think again. Even the Consumer Product Safety Commission (CPSC) has issued safety alert on trampolines. If you already own a trampoline, consider getting rid of it (but don’t give it away or sell it, put it in the dumpster). If you insist on getting or keeping a trampoline, you should at a minimum follow the AAP recommendations listed above. And make sure your homeowner’s insurance covers the trampoline, and that you have sufficient limits to cover injuries that may result, so that you will not be personally financially at risk if serious injury to a guest occurs. Whether you decide to have a trampoline or not, be aware that they can be very dangerous under the best circumstances, and inevitably  tragic under the worst.

What is tort law? Here’s a primer.

What is a tort? Here’s a primer on the distinction between civil actions and crime and punishment. Black’s Law Dictionary (7th Edition) (1) defines a “tort” as: “A civil wrong…

Hazards in the home: The dangers of dresser tip-over

The Allen Law Firm pursues diminished value claims on behalf of its personal injury clients as a “value added” service. Typically, the only expense is the appraisal fee unless the…